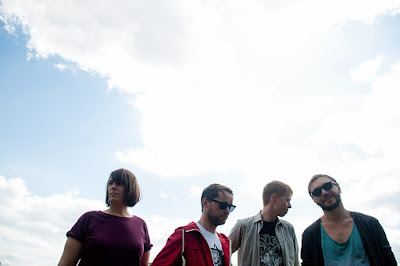 Matt's band The Leaf Library have a new album out soon, made up of remixes of tracks from 'Daylight Versions' by some absolutely terrific artists. I probably won't be able to do the description justice, so here is the press release in full...


The Leaf Library are pleased to announce Versions, an album of remixes by various artists including Cavern of Anti-Matter (Tim Gane from Stereolab), Isnaj Dui (Katie English of Littlebow), Greeen Linez, Far Rainbow (Robert Barry), and A New Line(Related) and The Declining Winter (Hood alumni Andrew Johnson and Richard Adams, respectively) amongst many others.

The remixes are all based on tracks taken from The Leaf Library’s acclaimed 2015 album Daylight Versions and will be released as a download and a limited edition CD. Each CD will feature handmade artwork by a different artist or writer, acting as a remix of the original artwork.

The ten tracks twist the original’s melancholy seaside drones into new and further out-there shapes. Cavern of Anti-Matter turn the droning flood epic Acre into a skipping, bright trip along the autobahn towards Harmonia’s forest retreat, whilst Greeen Linez (Matt ‘A Taut Line’ Line, and Chris Greenberg from Hong Kong in the 60s) shift Slow Spring into a Balearic, two stepping gem.

Two ex-members of cult Domino band Hood provide their own takes, with A New Line (Related) bringing a gauzy club throb to Evening Gather’s shimmering drift, and The Declining Winter (with Chris Tenz) adding speaker-busting dub weight to Slow Spring. Far Rainbow and Isnaj Dui both bring the droning and textured best out of Evening Gathers and Acre, respectively.

Definitely worth a trip to bandcamp methinks. Loon fans, make sure to pick you your copy soon!