Gigs, gatherings and other gossip 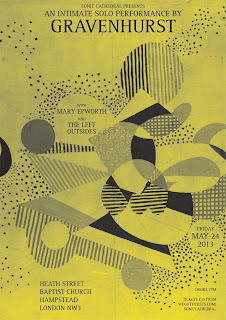 It’s not all just dwelling on the past on the Saloon website. Alison has announced a gig for The Left Outsides on 24th May supporting Gravenhurst in a church in Hampstead. There will be a bar apparently and should well be worth the price of admission.

Saloon’s collaborators have also been busy, Mike’s brother Rob (who collaborated with Saloon on ‘Have you seen the light’ amongst other things) has been touring the states as part of Hot Chip including playing Coachella. Another of our collaborators also inadvertently made it to the gossip pages this week.

In my own news, Alice and I had our first session in the ‘studio’ for about four years to work on some new Arthur and Martha material. Obviously don’t expect anything soon (if ever) but it was great to be making music with Alice again. Her other, much more active band Cosines have a new record out as well as some gig dates
announced.

Also, on the Saloon front, I found a couple of lost tapes at the bottom of a box on the weekend. Now this was hardly a find on the level of The Tomb of the Cybermen, but what I did find was a really nice instrumental piano version of Chromosomes played by Amanda, along with a demo of a song that Mike wrote and recorded solo called ‘Cool as can be’. Hopefully I will get them up on here in due course of time.

As you can see, my web skills now stretch to hyperlinks.
Posted by Webmeister at 13:22 No comments:

Pow to the People! Easter Sunday 2000

An Easter gift. In April 2000 we played our first gig for the Track and Field Organisation, we were first-on at what became the annual 'Pow to the People' Track and Field All Dayer at which took place at the The Monarch (now Barfly) in Camden, London.

This gig was was a big deal for us. Mike had tried hard to get us on one of their line-ups for a long time and somehow he got Steve and Paul from Track and Field to agree. At the time we didn't know that they had already seen us, supporting Stereolab at The Alleycat in Reading. We also didn't know that they weren't all that enamoured with us. Their first impressions, was that next to Stereolab  they 'couldn't see the point'. Obviously they came around to liking us  in the end as we ended up playing another gig for them in the Summer of 2000 and eventually went on to release three albums with them.

This gig was a big turning point for us and perhaps moved us towards the second phase of our career, where stopped trying to chase record labels and we embraced our inner indie-ness. Certainly it was our first London gig where we were playing to both a full house and the right sort of audience. At the time the most memorable thing about the gig was it marked the first time that I had ever received a parking ticket (and I learned that Easter Sunday is not a national holiday as far as traffic wardens are concerned.)

In terms of the set-list, we played a pretty solid and reliable set of 6 songs. 'Plastic Surgery' was by then a regular opener. I think this is one of the last times we played 'Suivez La Piste', a song we always struggled to get right live and one that only me seemed to like anyway. 'Electron' was in the pipeline as a forthcoming single. 'Spacer' again crept into the set. 'Make it soft' was pretty new at the time and already becoming a song we really enjoyed playing. This show also features my favourite live recording of 'My everyday silver is plastic' (which at the time we were still calling 'Nashville'). I remember feeling goosebumps from excitement as I stared out at the audience while playing the melodica refrain at the end. I felt at the time that I was living out my own Bernard Sumner fantasies.

As was regular for a Saloon gig, where we felt we had to be as difficult as possible, no attempt was made to play either track from the new single 'Shopping / Song for Hugo'

The gig was recorded by a lovely French girl called Anne who had written nice things about us in the fanzine that she wrote for called 'Creme Anglaise'. This was definitely one of our favourite zines and I remember a previous issue with a  lots of articles about Belle and Sebastian knocking about our house for a while. Anne recorded the gig and sent me a tape of it which (for some reason) she recorded the debut Badly Drawn Boy album on the other side. I loved getting my first Saloon bootleg; it reminded me of my mispent youth when me and my mates would sneak off to Kensington Market on school trips and buy badly recorded Joy Division, Cure and Mission C9O's and almost get beaten up on the way home by putting then on the coach stereo on the trip back to school.

Photos by Rattail and various others.

Email ThisBlogThis!Share to TwitterShare to FacebookShare to Pinterest
Labels: 2000, camden, London, pow to the people, Saloon, the monarch, track and field

A museum filled with timeless animals

The 4th April is always a special day for Saloon, not only is it Matt’s birthday but it is the anniversary of our first gig. This year is the 15th anniversary which is a scary thing as it still seems so recent. Time is a cruel mistress. My recollections and an audio recording of the night can be found on an earlier blog post. Listening back at it, I think it has been transferred from tape a bit fast so I may try to re-master it at the correct speed at some point.


Tonight also is the launch of an event organised by the good people at Readipop called “Reading on Tour” which aims to uncover the town’s rich musical heritage and stories from the Reading music scene past and present. The event takes place at 7pm at Reading Museum’s Windows Gallery and will unveil two heritage trails that can be walked around the town. I am sure it will be fun, sadly I can’t make it but hopefully Matt will be able to fly the flag.


Finally I was very sad to read the news that the author Iain Banks has terminal cancer. Over the last year I have many of his books, notably most of the Culture cycle. He has a fantastic vision and wit, and by bringing his distinctive literary voice to ‘genre fiction’ he is certainly the most exciting writer in the field. Sending best wishes for Mr Banks and his friends and family.
Posted by Webmeister at 09:54 No comments: