A few days ago it was lovely to get a message from David, a Saloon / Arthur and Martha from Madrid who sent me us these great photos of him sporting a fetching Happy Robots T-Shirt that he made himself. 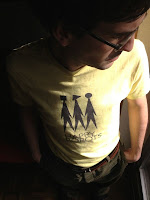 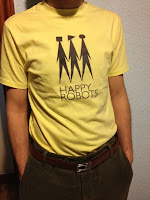 Perhaps you have noticed that I have made a few tweaks to the blog; the ‘gig list’ is now the timeline as I hope to add details about release dates and other things that we were up to. And the big update is that I have uploaded all of the old photos that I had on my computer onto my Flickr page with links from the relevant event in the timeline. As you might expect, I have not done much in terms of editing them, which is why they are not all that flattering (my double-chin features quite prominently on several photos).


For future blog posts I may say something about the recording of each of the singles, mainly so that the people updating the Saloon Discogs page have something to chew on.  If you have any other suggestions for things you would like to see on here please let me know.

Finally, big congratulations are due to Matt and his lovely wife, who have fantastic news that they are now proud parents. With all our best wishes as they enter the magical realm of the un-slept.
Posted by Webmeister at 15:29 No comments:

In my determination to get as many of the recordings from the archive up here as soon as possible, here is the next which is from 21st January 2002 at the Betsey Trotwood, in Farringdon, London.
This was one of the dates on another long tour for us, supporting Kindercore and Track and Field label-mates Dressy Bessy. I don't think a week touring was very much to some of the US bands we played with like Dressy, Great Lakes or of Montreal who seemed to know how to handle the mental and physical strain. But to us, a week touring was a big deal as we we all had jobs or college to go back to, and none of us agreed with the diet of peperami and kitkat chunky.

I don’t have very much in terms of artifacts from this tour, which is why I am a bit sketchy on details. I do have the flyer scanned here, although I don't know if we used it as its accuracy is questionable and is of most interest for the creepy picture of Alison with the image from De Stijl (and the ‘Shopping’ record sleeve) superimposed on her face creating a creepy robot / Boards of Canada look.

The tour itself I don’t remember that well either, which is why I can’t talk about it at the same length that I did Summer 2003. Dressy Bessy were a great  bunch of guys and gals, although on a tour like that we didn't get to 'hang out' a great deal  (as permanent designate driver I never got to ‘hang out’ anyway). My most profound memory of the tour was the members of Saloon eating really good fish and chips (cooked in beef dripping) in the front bar of the Adelphi in Hull, watching an episode of ‘The Good Life’ (from where came the song title)

I didn’t know much about Dressy Bessy before we toured; I had a copy ‘Pink Hearts’ and quite liked it, although it was miles off of what we thought we were doing. The difference between our tracks on the great tour split single showed that we were very much on a different page.

Dressy Bessy were though the *loudest* band we ever played with, which was a total shock considering their recorded sound. They forced me to wear earplugs from then on. We did play with them again in the Summer of 2002 for the live Peel Session. By then ‘Progress’ had come out, and they made us realise the degree that we had ‘broken’ in the States with tons of college radio play. They were probably surprised to be 'supporting' us on the Peel show, but obviously they had the last laugh and are still going strong with a new LP for 2014. They were a cool bunch and, although I didn't understand it at the time, I am proud that we got to do that split single with them.

Anyway back to the gig posted on here. Relatively tight for us (with the odd bass- slip from me) the vocals are nice and clear and Amanda’s voice has held up amazingly we had been on the road for a week. A good example of the 7 song Saloon set- structure of the time: Big Opener, Poppy Up-tempo One, Slow One, Fast Noisy One, Slow One, Fast One, Big Noisy Ending. Most interesting perhaps for hearing Spacer again, which we played far too much considering it was only ever released on the Blue Demo, nice to hear the the megamix opening of Movimiento / Impact also notable the lack of GATNB  which we were no doubt sick of by the end of the long tour.

The recording is not bad for one done on a  tape recorder. I don’t know who recorded it, as someone sent it to me at the time. What I always remembered this one for was the audience chatter, notably the person who slags-off the bass player, saying midway through ‘Bicycle Thieves’ of the bass-playing “it’s not nice, it spoils it.” Perhaps this is one I shouldn't share with my grand-kids then.

The fantastic Gideon Coe played two tracks from the first Saloon session last night 'Spacer' and 'Girls are the new boys'. Gideon has continued to play a number Saloon tracks over the years. Interesting on this occasion to hear us back-to-back with 'Geek love' by Bang Bang Machine (the other 'controversial' Festive 50 poll toppers, a lovely song that I used to have on a C90 way-back),


Anyway, you can listen to Gideon's show on the Radio 6 website for the next seven days.


Gideon's show is always a brilliantly eclectic blend of alternative, left-field, new wave, ska, reggae and other stuff so it is always great to hear Saloon in the mix. Also fun to hear live favourite ‘Spacer’ again, as the only other recording on the ‘Blue demo’ has never been released before (and out of sheer stubbornness I refuse to post it online).


Sadly someone mistyped our name (‘Salkoon’) as shown on our BT box.


Back a few years ago Gideon also played ‘Arthur and Martha’ a fair bit, spinning both singles ‘Autovia’ and ‘Music for Hairproducts’ as well as plugging the album. When he last played us he announced that we were busy in the studio recording the next album. I don't know where he got that idea from, but who knows now, stranger things have happened.
Posted by Webmeister at 11:29 No comments:

Mahogany, former collaborators and label mates of Saloon, have a new song out called ‘Phase Break’ released on their own Renovo label. I am sure Saloon fans will appreciate seeing it on here:


To me the video is a little New Order 'Round and Round' and a bit 'Russians' by Sting sprinkled with a large dusting of Snub TV (definitely no bad thing in my book).

And here is the previous 'new' video; hopefully both will be collected on an album before long:


Both videos show off the band's new aesthetic, such as the repeated logo motif of the bell at the end. Phase Break is out on March 12th through iTunes and ‘all major digital retailers’.
Posted by Webmeister at 11:29 No comments: