Don’t they say in 24 Hour Party People “if it's a choice between the truth and the legend, print the legend?”

The legend we told was that after having almost killed myself twice, firstly in a car accident (truth) and then by electrocuting myself while re-wiring a moog during a thunderstorm (fiction, it was a delay box years later and it probably wasn't even raining) I decided to form a band in order to leave something behind.

The truth was equally mundane. I moved to Reading because I hated my job, my old band had fallen apart and I wanted to hang out with my friends. I moved into a sprawling 6-bedroom student house with my best friend Mike some of my other closest friends and an Irish girl called Nina. The first thing I did was paint my bedroom bright orange. The room was lit by a vintage tanning lamp, under the light of which we recorded our first demo.

I moved to Reading with no job and a couple of hundred pounds in the bank. I had one plan, to form a half decent band to play some of the better songs I had accumulated while in  my last band The Deviants. On my first Sunday in Reading, after going to see Austin Powers at the cinema, and while enjoying a drink in the Purple Turtle, I told my plan to Mike. He immediately wanted to be a part of it. We agreed, he would be the drummer and I would play bass (simply because they were always the hardest members to find and we wanted reliability). The plan was to have a female singer, and we would wear black roll-neck jumpers, even in the summer. Within minutes he was scouring the pub asking any attractive woman in a roll-neck jumpers to join the band. We even agreed on the band name that night. Mike threw some words and. Saloon just jumped out. In hindsight I, don’t know exactly why I loved it so much. I liked the fact that it sounded countryish and that we could confound expectations. But mostly I just liked the look of the word. The next weekend I went into town and got the word SALOON printed in playbill on a red t-shirt. I still have it, and it still looks a bit shit. 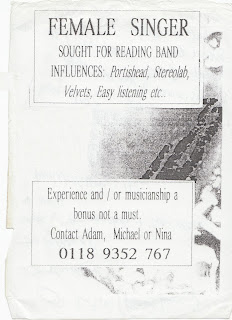 One evening I went to see my friend Emma’s band playing downstairs at the Alleycat. Emma was playing cello in a local group called British Air Power. To be honest, I don’t remember much about the band, but the one-person who did stick-out was their viola player. I recognised her from the Reading scene, as a bit of a face from around town, probably the After Dark Club or Rockit the vintage clothes shop. On this evening she stood out because at the end of every song she’d run to the bar and get another drink before running back on stage. After the show we got chatting, and she agreed to join the band.

So Saloon by this stage had a fairly unconventional line up of two viola players, two bassists, a drummer, a trumpet player, one guitarist but no singer. Although at no point had we managed to get us all in a room together. To rectify the singer issue Mike and I put a few adverts up in bars and music shops. “Female Singer sought for Reading band. Influences, Portishead, Stereolab, Velvets, Easy Listening.” Perhaps more telling was the disclaimer “musicianship a bonus not a must”.

In my orange room over the next few days, I auditioned two people. The first sung an acapella version of Killing Me Softly. Her singing was pretty terrible but what I disliked most was the fact that she sat on my bed rather than my vintage arkana chair. Too forward. The other person to audition had seen the advert in the local music shop with her boyfriend. She hasn’t heard of Stereolab (her boyfriend told her they were boring anyway) but she was a fan of Portishead. I met her in the car park of the local pub, so that her mum could see that I wasn’t some weirdo out to pick-up girls (if I was I wouldn’t have listed Stereolab and The Velvets on the advert anyway).

The singe was Amanda. She sat on the arkana chair and sung two songs, while strumming my terribly cheap electric guitar. Those songs were Sugar Boy by Beth Orton and Flowers in December by Mazzy Star. The versions I have posted here, I found on a C90 and I am pretty sure this is her rehearsing for the audition.


She sung her songs through once, and I think I may have sung her back one of my own tunes (probably ‘I am the cheese’) and then I got Mike to come in and she sung Sugar Boy again. You don’t need me to tell this to a Saloon fan, but her voice was a revelation. I knew Mike was impressed because he became all giggly. In the back of my mind though I was worried that at 17 she was a bit young for the band and wouldn’t stick with us for long, I also was a bit worried that her voice was going to be drowned out by the rest of us, but I didn’t get to air those concerns. The three of us got a bus to town and before we got off Amanda asked us if she was in the band, Mike just laughed and said ‘Yeah’. So she was in. We went and had some drinks to celebrate.

Now we had eight members. We still didn’t get all of us in a room together though. I think we may have had one rehearsal with Amanda, Mike, Natalie and Steve before Natalie and Steve left. Nina I don’t think we ever heard her play the trumpet. She did inspire a song though, 'Nina Says', which I wrote over Xmas in 1997.

On top of being an amazing singer, Amanda also had access to a rehearsal space which was a total bonus, which was a room above The Fox and Hounds pub in Caversham. By now I'd got a proper job so I spent my pay packet on a £500 PA (which is now only used for birthday parties and christenings.) We had a couple more rehearsals with Dee before she left. We weren’t rock enough for her. The songs we had in our set at this stage were ‘ Fuzzy Felt’ ‘Spacer’ ‘I am the cheese’ and ‘Spectrum Colour Clash’, a song of Amanda’s that I named ‘Conquistador’ and a new one based on the last days of Rome penned with Amanda who wrote the melody called ‘Bring all your love to me’.  Alison had by now joined the band fully, but Mike was becoming concerned that we had quickly gone from 9 people to 4 and that we needed to do something before losing momentum.

Mike arranged for us to turn up at an acoustic session at a hippy café called Pangaea World Café Bar on London Street. We turned up in our roll-neck jumpers and hogged the evening. Mike took forever to set up his snare and cymbals much to the chagrin of the organiser. Despite my ineptitude, I had been forced to move onto acoustic guitar until we could find a proper guitarist. Alison was on viola and Amanda sung and played a  Casio PSS-30. We played three songs, ‘Fuzzy Felt’ ‘Cheese’ and ‘Spectrum Colour Clash’ before being ushered off. About half an hour later we were invited back on where we played ‘Bring all your love (to me)’. It was great to finally be playing in public. The organiser said something about it being the start of something big, or some similar cliché. Someone else said it was like seeing the Velvets for the first time (they must have been really old and well-travelled to have seen the Velvets the first time themselves).

After  Pangaea, our confidence was up, but we knew we were missing something, notably a half-decent guitar player. We put up some more adverts which stated ‘No Pot-Noodling’ as more than anything I wanted to avoid getting a muso or proper musician.

I am pretty sure only one person replied, certainly only one person auditioned, which was Matt. His musical CV included some time in a bad funk band, he couldn’t play a barre-chord (I can still almost only play barre chords) but he was young, keen, knew who Stereolab were, and most importantly turned up to his first audition in a roll-neck.

The line-up was complete, and although we played two shows in our career without Alison and had the occasional guest musician, the line-up stayed the same five people for five and a half years. Only a few weeks after Matt joined (basically as soon as he had mastered the E-Barre) chord, we played our first gig at the Fox and Hounds in the very room we rehearsed in.

Unlike with Amanda, we didn’t tell Matt straight away that he was in the band. He waited until after our second or third rehearsal to ask “Am I in the band”
“Of course you’re in the f-ing band" we replied.
The rest, as they say, is anything but history.
Posted by Webmeister at 16:51 No comments: 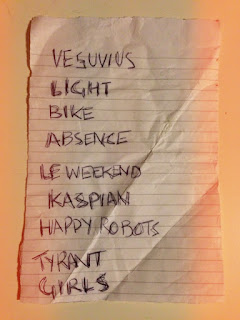 I have been pretty busy the last few weeks so not had much of a chance to do any updates on here. But seeing as the Saloon website was down for almost 10 years, I don’t feel too guilty.

Nice to hear an interview on Radio Berkshire with Reading band The Jettes. Two of the members are Richard and Sarah who were also in Desdemona, a band that Saloon played with several times, and I am sure we had them at the Happy Robots night on a number of occasions. Richard also came and helped out when we did our final tour in Scandinavia. We did try and drag him on stage for the finale of ‘Girls are the new boys’ in Stockholm, but he declined the offer. Great to hear them doing so well.

Also in the news, but far less uplifting, is the story of Naomi Button who has had her baby girl Elsa snatched. Naomi is currently campaigning going through legal proceedings to try and get Elsa back from Egypt where she is being held by the family of Elsa’s father. Naomi was a close friend of Mike back when we lived in Reading. Naomi needs financial support for her campaign; if anyone reading this can help I know it would be incredibly appreciated.

So this morning I read that the cassette tape is making a comeback. Not in our house though, in fact if it wasn’t for me clearing out all the C90’s this site probably wouldn’t exist.

Another reminder that Alison has another gig coming up with Left Outsides and Alice (my partner in Arthur and Martha) has a new single and new video out now with her band Cosines.

And finally, while working on the new Arthur and Martha record (which is a rare enough thing in itself) I found a bundle of Saloon set lists in the Moog Opus 3 case. Four lists all from the same gig, no idea which one it was though. Undoubtedly a headline set in 2003 but certainly not Scandinavia as we definitely closed with Good Life / GATNB there. If anyone knows the right answer please write in to the usual address to win something we have overstocked in the shop. Can’t say fairer than that.
Posted by Webmeister at 10:51 No comments: