In 1999 – 2000, as well as doing Saloon, we were also putting on a lot of gigs (culminating with the Happy Robots festival in 2001). Although we had no problem getting headline acts, we struggled to find decent local support bands and Saloon could only play so- often before everyone would be sick of us.
From that came Saloon offshoot-band Moskva.
Matt and I had always been keen to pursue our Krautrock side, but Mike just wasn’t into it - we could never persuade him to just play the drums from ‘Mother Sky’ for 20 minutes. Initially working under the title the ‘4/4 project’ (although strictly speaking 2/4 would have been more correct) with Matt on guitar, me on synth and with my housemate the brilliant avant visual artist (and occasional piss-artist) Philip Newcombe on bass, we threw together three ‘songs’ and Moskva was born.


Before we had even rehearsed, I earmarked us to support Oxford band Whispering Bob (who included the founders of Truck Festival and who morphed into the successful (by our standards) band Goldrush). The one problem was that Moskva had no drummer and time only for one rehearsal before the first gig. Matt met some guy in the Purple Turtle who had ‘band-hair’ and claimed he could drum. Unfortunately we discovered during our one-rehearsal that the guy couldn’t keep a beat at all. He could just about shuffle through an approximation of the funky drummer – badly. But what we wanted was something between Jaki Liebezeit and Volkswagen building industrial automaton.  So Matt sacked the drummer on the day of the gig and we turned up to the venue with just a just a Casiotone MT-60, and the plan to use the ‘rock’ setting as the drums for each track.

Thankfully after Whispering Bob finished their sound-check, Robin the lead singer asked if we wanted to borrow anything. I cheekily replied ‘Your drummer please!’ and they agreed! With the Whispering Bob drummer (sorry I can’t remember his name) and with Robin improvising and adding extra melodies on the flute, Moskva muscled our way through a 3 song set of noise, 2/4 beats and errr more noise. It was a great gig, with an audience of about 20 people there to see it.
It was at least six months before we played again, this time to support the fantastic Electrelane who we put on at the Rising Sun 2nd March 2001. This time we were more prepared and made sure we had a drummer of our own, this time Clare a friend of Amanda’s from Reading College. With a new song in the repertoire (the originally titled Neu-One) and with Amanda completing the line-up on the melodica, we played another barnstormer of a set. Although there is no recording of this gig either, we do have a recording of the rehearsal which I have included here. 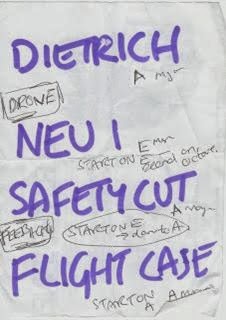 The final gig was in support of Printed Circuit from Leeds, also at the Rising Sun. By this time most of Saloon were living in London and busy enough with the main band so, despite not having even been in the same room for at least 6 months, we didn’t bother having a rehearsal. Someone did video it and clearly we got through it without hiccups somehow. God knows who had the bright idea of dressing us all like Italian waiters (probably me).  Once I stopped putting on the Rising Sun gigs and once the Saloon album came out there was no time for side-projects, and Moskva never happened again. I wish we had gone into Wired Studios and knocked up a 12” EP or something, but at the time we didn’t even think about it.
Now as all three of us live in London, there is talk of Moskva reforming. I suppose you’re never too old to be in a Krautrock band, right?....

And here is a playlist of a few of my own Krautrock faves.