The Tour that broke the camel's back (Summer 2003)

Some bands are incredibly protective of their image and won’t let so much as a un-photo-shopped photo get posted online without their consent. But, if this blog is to have any basis in fact, then it needs to be warts and all, because for all the times that Saloon were good, there were plenty of times when we were pretty terrible. We always wanted to be an antidote to corporate major-label indie-rock. Mumford and Sons we were not.

So, after asking on this blog for anyone to send me any Saloon live recordings they might have, a chap called Rob kindly sent me over recordings from our Summer 2003 Tour date in Stoke. That seemed to give me a good opportunity to blog about that particular tour. The Summer 2003 tour was to promote the release of our second album ‘If we meet in the future’. It was the longest run of gigs that we had ever planned; over two full weeks with no more than one or two days off, taking us from as far north as Glasgow all the way back South to Devon. As the Stoke recording attests, we were not at most consistently good on that tour, and perhaps it was the tour that broke the camel’s back. 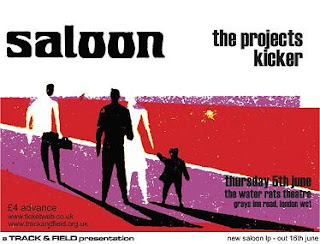 It all started to well enough. The first few dates were with the lovely Kicker, who were part of the Track and Field Family and always a joy to hang out with.


We started with a solid sold-out gig at the Water Rats on the Thursday which kicked things off well. On the Saturday we made another visit to one of our favourite towns and venues, The Jug of Ale in Birmingham. The Jug was an OK gig on this occasion, but perhaps not our best we played there; I think Trish and James from Broadcast came to see us and I wish we’d made more of an effort to play some of the more interesting material. Tmesis in Manchester was a nice venue, but at £7 a ticket for a Sunday night where the going rate to see us was normally £4-5, someone had got their sums wrong. For some reason we seemed to attract quite a few goths in Manchester, which was cool. The Mission was the first band I ever saw and I have always had a soft spot for those of a Gothic persuasion.


Perhaps the best part about the start of the tour was that the lovely Daniel from Germany, our number one fan who had supported us the day he heard ‘Futurismo’ on the John Peel show, came and joined us for these first few dates. Dan recorded our opener ‘Vesuvius’ each night and I have posted his recordings on here. Dan also bought T-Shirts for all his kids, which was much appreciated.


But the tour quickly went downhill from there, The Magnet in Liverpool I remember only for the Beatles throwback roadie who needed a wash and a clean T-shirt. The sound was loud and muddy.


It was either at The Magnet or the Royal Park in Leeds that we were joined by American Analog Set. They were one of my favourite bands and 'Know by Heart' I still listen to all the time. Their own tour had got a bit messed up so Steve from Track and Field managed to piggy-back them onto ours. Although we got on well with the guys at the time, I have heard since that some of the guys weren't that happy supporting us. And in fairness I don't blame them. On a performance basis alone, they walked all over us. They played the same set every night and were tight and slick. We were playing from a pool of about 25 half rehearsed songs and we played them in any sort of order depending on our mood. We also had way too much equipment for the size of venues (including 3 unreliable old synths, a vintage tape player and a new guitar that would not stay in tune).
Then to Sheffield, this time I think we played with just Kicker. I remember that as a good night; it was one the few occasions that we played ‘Intimacy’ which is my favourite song from the second album. The soundman, who was a Krautrock fan really got us, and on the rare occasion that I turned to face the audience I could see him bobbing along at the desk.


The next night, I think we went to St Albans.  At least, we went to St Albans at some point in our career and it was a last minute booking. I do remember that it was miles away from our next gig anyway (I booked it) and afterwards driving for miles to get to a travel lodge where we literally stayed for 4 hours so we could get to Glasgow. The Glasgow and Edinburgh shows, both with AmAnSet were polar opposites. At the Stereo in Glasgow we had a sell-out show, with people there to see Saloon and punters being turned away at the door. I still love Glasgow. In Edinburgh played in a back-packers hostel to a crowd of drunk Australians using a barely fit for a pub karaoke PA. We got very drunk afterwards. The next day, we had a 12-hour non-stop drive down to Rescue Rooms in Nottingham. AmAnSet beat us there so they headlined. We claimed it was for expediency, but I know both parties were very happy with the arrangement.  We were shattered. The Rescue Rooms was a big venue so we thought we could ask them for dinner at least; we got three packets of McCain MicroChips and MicroWings between us.  Hardly haute cuisine. Matt and Mike went to Subway, which at the time seemed incredibly exotic to me.


We said adios to AmAnSet that night.  We went to see them about a year later when a couple of us were in Paris. Andrew from the band asked us to go to see Harry Potter 2 with him, but we hadn’t seen Harry Potter 1 so declined the offer.
The next night we played in Stoke. Before the show we had a much needed trip to the launderette; Mike had a tendency to dry his clothes in the back of the van, giving our already shabby vehicle added traveller-chic.


The first time we played the Talbot Hotel in 2003 it went well and I have a nice recording from the desk somewhere. But on this tour we were at our shabbiest. “Could I have a refund?” sung Amanda at the start of Happy Robots. She may not have been the only person in Stoke asking that.

Matt’s new guitar died at the start of Happy Robots, the tuning is all over the place during The Good Life and Kaspian and Sound of Thinking are a right racket. The choice and order of songs feels very unorthodox for us; I am sure we would have opened with Vesuvius which must be missing. I do remember we only played ‘The Sound of Thinking’ because the promoter enjoyed it so much the first time we played there. He must have been disappointed with this version. It is nice to hear ‘2500 Walden Ave.’ though. That was a song we didn’t play much when we were touring the first album, I’m amazed we were still playing it at this stage, but that kind of shows our generally cavalier approach to playing whatever took our mood.


After The Talbot Hotel, things couldn’t get any worse. But they did.  On the Tuesday at Soundhaus in Northampton, we not only had terrible sound, there was hardly anyone there, maybe 30 people max. That really was rock-bottom. We did have a nice picnic on a roundabout though.


We had been due to play The Cube Cinema in Bristol on the Thursday, but that fell through. Steve had done a bit phoning around and got us squeezed onto the British Sea Power tour. We had connections with BSP anyway, they were University of Reading graduates and I asked Alison to join Saloon after seeing her playing in their former incarnation, British Air Power. Anyway at this stage in 2003 they were mid-meteoric rise, due partly to getting a good break with Rough Trade but mainly due to working their backs-off, playing night after night. Their manager offered us not just a slot on the Thursday, at the Exeter Cavern but also two other nights on their tour. This was a great opportunity for us to - not just to salvage our own derailed-tour - but to play some good shows to loads of the right sort of people (and perhaps also sell a shed-load of t-shirts). This would have meant pulling out of our dates at Chelmsford and Cardiff though. So we declined the offer. That was the band we were. We saw ourselves as the good-guys, putting loyalty and ‘doing the right-thing’ before what would have been the much more sensible management decision.

So we played Chelmsford on the Wednesday. It was a good enough gig, there was a nice crowd and the Chelmsford crew were always a really lovely bunch of people, but in the back of our mind I couldn’t help asking had we made the right decision. On the Thursday we did the British Sea Power show. It was a brilliant gig, to loads of people, we sold a shed-load of merch and the BSP fellas were lovely. On the Friday we played Barfly in Cardiff where we supported The Loves, and it was business as usual. Although we shared a label with The Loves, it was the wrong crowd for us, the sound was crap, and even the support band harassed me in the toilet telling me that our band was ‘miserable’ and brought the night down. He was probably right. 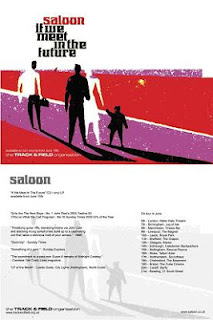 Finally! Saturday, the last night and our ‘hometown’ of Reading. We were playing 21 South Street a much bigger venue than The Rising Sun where we normally played. It was a sell out, the support acts Desdemona and The Projects were brilliant and the sound was great. As we closed with ‘The Good Life’ followed by Girls are the New Boys’ I remember thinking, we have finally got the sequencing right. (We didn’t make that mistake again, on our final tour in Scandinavia we took a leaf out of the American Analog Set model and played the same tight set every night, we even played some of the singles.)  In Reading, the promoter said we sounded like Roxy Music, which was a first.


Ultimately, I think we were all just happy to have gotten to the end of the tour. I still remember the sun setting as we loaded the van that night. It was a lovely evening but I had taken to wearing a massive donkey jacket for some reason, whatever the weather. We made a fair bit of money on that tour; I think we paid ourselves £100 each which was a first, but most of the money, as ever, went on keeping the van on the road.


A couple of weeks later Mike announced he wanted to leave the band which led to our unceremonious falling-apart. So there is my rather lengthy take on the Saloon 2003 summer tour. If anyone else has their own thoughts, we’d love to hear from you.